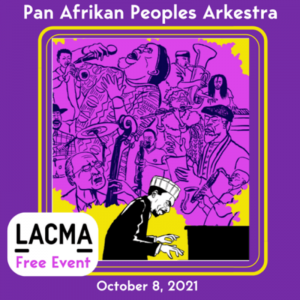 Los Angeles, CA – September 7, 2021 – The second weekend of Angel City Arts 14th Annual Angel City Jazz Festival kicks off with their popular FREE event in partnership with Jazz at LACMA, bringing Los Angeles’ legacy African-American big band, the Pan Afrikan People’s Arkestra to the museum’s outdoor stage Friday, October 8 at 6 pm. This concert is a special celebration of the 60th anniversary of the Pan Afrikan Peoples Arkestra, which was founded by revered pianist Horace Tapscott in 1961. This year also marks the 30th anniversary of the Jazz at LACMA concert series. Info on the free, walk-up event is available at https://angelcityjazz.com/event/papa/.

The Arkestra (Ark or PAPA for short) started as a collective of jazz musicians and other artists who were fired up like no other. The Ark was also formed as a response to the racial inequality in the US. Artists subjected to prejudice who saw opportunities denied to them found an outlet to express themselves via the Ark (perhaps influencing later groups like the Association for the Advancement of Creative Music and the Art Ensemble of Chicago). The ensemble began with a few people rehearsing in Horace’s garage, and they were soon doing free shows at parks and churches, workshops at schools, and other public events. Since its inception, the Ark has been performing with an ever-expanding roster of talented artists. Some notable members include: Kamasi Washington, Phil Ranelin, Sonija “Maia” Harper, Arthur Blythe, Adele Sebastian, Kamau Daaood, and Dwight Trible just to name a few. The Ark is currently mixed with veteran members as well as young musicians, all led by Mekala Session, with the help of Jamael Dean, both second-generation Arksters, and the elders of the group. It’s quite likely that Ark members who have led Los Angeles’ recent Black Jazz Renaissance will be playing on the gig.