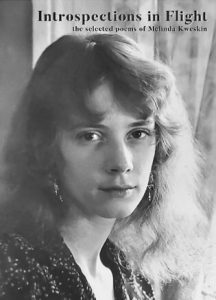 Los Angeles, CA – March 5, 2021 – In the months before noted former Jungle and Breaks DJ and electronic music activist Kat Goldfarb’s mom Melinda Kweskin passed in 2015 Kat compiled her life’s poetry work into a manuscript. After several years of compiling the poems along with photos and tributes, that book arrives in stores today. Kweskin was a poet starting in the late 60s until her death, while some of her work was published while she was alive, much of it wasn’t, until now, in the resulting book Introspections in Flight.

Kat was able to arrange for the book to be published by noted San Francisco Bay Area based utopian literary publisher Zeitgeist Press and it’s due for release today, March 5.

Zeitgeist is part of monthly poetry readings the first Saturday of each month (now online on Zoom) hosted by the non-profit Poetry Promise, Inc. and sponsored by the National Endowment for the Humanities. Zeitgeist publisher and the first Poet Laureate of Clark County, Nevada Bruce Isaacson will read a selection and host other featured readers including bestselling author Dick Russell, and Melinda Kweskin’s family, giving life to her poems from Introspections in Flight in their first ever public reading tomorrow, March 6. To join the reading, please go here at 2pm PST on Saturday March 6.

Melinda Kweskin was known in artistic circles as noted folk singer Jim Kweskin’s wife. The Jim Kweskin Jug Band released eight albums on Vanguard in the 1960’s and launched the career of noted singer Maria Muldaur. He and Melinda had a daughter in the early 70s, and he has continued to record since.
Melinda started writing poetry in earnest in 1967 when some of her poems were featured in a Boston underground newspaper, Avatar. She began to take her writing very seriously and would type her poems on a classic typewriter. She continued both poetry and prose wiring as a contributor to Avatar, including a series featuring her correspondence with soldiers in Vietnam.

As she got older, she also began writing letters and kept up correspondence with a tremendous amount of people, and kept writing poetry, archived in both print and digitally.

She had a career as an accountant for many large companies around the country up until she had to have emergency quintuple bypass surgery in her early 50s that began a time of health challenges that continued for the rest of her life. She soon moved to Los Angeles with her daughters, and Kat’s twin sister Deirdre became her main caretaker. Her condition declined over the years and in the last years of her life, she was mostly home bound.

During this time, she was constantly writing, and she was able to bring her visions into her work, enabling a unique understanding of the emotional, spiritual, and intellectual realm of those around her. Her selected poetry works in Introspections in Flight seeks to share this understanding with the larger world.
The poems in the book are interspersed with remembrances from some of Melinda’s many friends as well as from her daughters. One friend, Jessie Benton (daughter of noted American painter Thomas Hart Benton) who didn’t contribute but loved the book noted, “I think it is the loveliest tribute to a mother that has ever existed, if perhaps the first.” (referring to some mother tributes that are more about the children working through their feelings rather than a celebration).

Introspections in Flight is available at Zeitgeist Press at https://www.zeitgeist-press.com/index.php/product/introspections-in-flight/, Amazon, and other online booksellers today, March 5. To join the public (Zoom) reading please go here at 2pm PST on Saturday March 6.