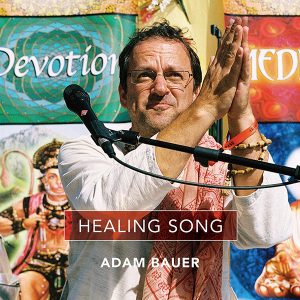 North Leverett, Massachusetts – Noted Kirtan artist Adam Bauer will release the first single, “Healing Song,” on all formats including Spotify, from his upcoming third album, Return to the Sacred (out October 2) tomorrow.

The seven-minute track (short in the Kirtan world!) “Healing Song” is a beautiful paean to the healing process that Adam has undergone in the last year as his father, Edward Bauer, and beloved teacher (and Maharaj-ji guru brother) Ram Dass, both left their bodies in late 2019. “Healing Song,” with lyrics in English and Sanskrit, unfolds as a prayer of affirmation, a timeless reminder of the reality of truth, consciousness and bliss even during challenging times.

Return to the Sacred is an inspired collection of all-original music born during extraordinary times. At the end of co-leading a pilgrimage in India, Adam landed at Depot Records in Delhi to create the core of these tracks on the cusp of the global pandemic. During lockdown in the US, the album was crafted with highly respected world music producer Ben Leinbach (Jai Uttal, Deva Premal).

The India recordings were brought together and anchored by Mohan Shyam Sharma (Ravi Shankar, Hari Prasad Chaurasia, All India Radio), one of world’s most revered players of the pakhawaj, a traditional temple drum. The Indian recording artists are an all-star team of talented musicians including Rajeev Janardan on Surbahar, Kailash Sharma on Bansuri, and Hricha Rashmi and Deepa Mishra on vocals.

The tracks were exquisitely embellished in the US, on “Healing Song” by Grammy nominated classical cellist Joel Cohen, and Ali Akbar College of Music ED Steve Oda on sarod, and on the rest of the tracks by cellist Noah Hoffeld (Phillip Glass, Natalie Merchant, Krishna Das) and lifelong Bhakta and kirtan multi-instrumentalist Visvambhar (Vish) Sheth (The Mayapuris) playing Indian drums and percussion. Leinbach brought his trademark deft production touch, and mixed and mastered Return to the Sacred at Old Bull Studios in San Anselmo, California.

In this new album of all-original compositions, Bauer honors the traditional lineage while integrating heartfelt English lyrics, presenting this rich and timely offering as a prayer for humanity’s Return to the Sacred.

His critically-acclaimed first solo record, Shyam Lila, debuted on Mantralogy Records in 2014. His sophomore album Wonderville was released in 2017 and generated more interest in his work. Adam’s music is available on major services like iTunes and Spotify, or directly from https://iamadambauer.com/

Adam was blessed to spend many years playing bass in support of sacred chant superstar Krishna Das, and later with Bhakti Yoga legend Shyamdas, both of whom nourished his love of sacred sound and the yoga of devotion. For the past decade, Adam has been on the road offering his own perspectives, teachings, and kirtan across the Americas, Europe and India, and even Antarctica. A lifelong student of the devotional life, Adam enjoys gathering with others and comparing notes on the path wherever the opportunity arises.