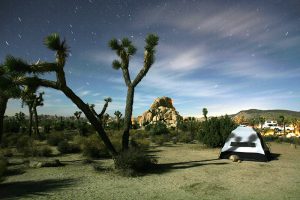 Joshua Tree, CA – On Saturday June 4, 2016 at 9:40pm around 100 people attending the annual CONTACT in the DESERT event saw several UFOs. Reportage and video of the sighting was covered in the Daily Express, Coast to Coast AM, and other outlets. Will the aliens return for the event’s 5th year?

CONTACT in the DESERT descends on Joshua Tree, California, one of the most famous UFO sighting areas in America, attracting thousands of UFO enthusiasts from all over the globe. Now the largest UFO Conference in the US, CONTACT in the DESERT will bring together an all-star team of experts to the Joshua Tree Retreat Center May 19 – 22, to discuss some the latest developments in the field.

Breaking off into several tracks, the conference will focus on Ancient Alien studies, Contact Experiences, Sightings, Crop Circles, Abduction, other proof of alien visitation, and Government Interactions with Aliens.

In addition to the panels, lectures, meet and greets, film screenings, and natural beauty included with a weekend pass, attendees are also able to purchase tickets for more than 30 workshops from the top UFO experts, including David Wilcock, Erich von Däniken, Giorgio A. Tsoukalos, Dr. Steven Greer, and a luncheon with George Noory. Night vision and fieldwork experiences will be available, and on Monday May 23, nine of the presenters will each offer three-hour intensives.

The Joshua Tree Retreat Center, located at 59700 29 Palms Highway, Joshua Tree, CA is the perfect setting for CONTACT in the DESERT. An underappreciated modernist gem, the spectacular center, set on an ancient sacred site, is the oldest and largest retreat center in the Western US and boasts outstanding architecture designed by Frank Lloyd Wright and his son, Lloyd Wright. Lodging options include extensive and beautiful campsites at the retreat center with bathroom facilities and a sparkling pool (however no hook ups).

On-site accommodations are already sold out, but there are also plenty of nearby hotels in Joshua Tree, Yucca Valley, and Twentynine Palms, with special rates available for attendees. The Center offers a variety of meal-plan options right on site.

Early-bird tickets for the event are $225 (or $410 per couple) until March 30. After that, regular tickets are $275 (or $495 per couple). Tickets and workshop passes are available at www.contactinthedesert.com/tickets/