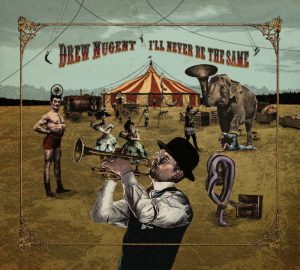 Philadelphia, PA – February 22, 2017 – Philadelphia’s noted neo-swing master Drew Nugent is releasing his long awaited solo album I’ll Never Be the Same this Friday February 24 through CD Baby for hard product and via the usual online suspects for downloading and streaming.

Nugent will be celebrating the release of I’ll Never Be the Same at one of his favorite haunts, La Peg Brasserie at Fringe Arts, 140 N. Columbus Blvd, Philadelphia, PA 19106, on February 24 at 10pm. Tickets are $25 which include the show, a drink, and the new CD, are available at the door only, early arrival to ensure entry is strongly suggested.

To promote the album Nugent has released a very modern and gender fluid video for the quite retro, but racy single “Caretaker’s Daughter” at https://youtu.be/fvhwx_16fGs.

Opening with an upbeat version of the jazz standard “All God’s Children Got Rhythm” from the Marx Brother’s classic A Day at the Races, you know you’ve stepped into a swing party. Followed by an original composition “When Your Feeling Blue,” the trumpet part brings you in and the piano break keeps you there. Another original, “I’d Rather Get Busy Than Blue” is an escapist song with innuendo often found in the 1920s when using clever word play to get around censors while titillating audiences was part of the art of being a lyricist.

“I Live in Trafalgar Square,” was composed by C.W. Murphy in 1898. If listened to as background music, it can seem like a charming, nostalgic period piece, nice for a “Downton Abbey” themed party. But Nugent and Evans transport us back to a smoky music hall in late Victorian London. The homeless, faux-aristocratic narrator is clearly delusional, bragging to his audience that being homeless in Trafalgar Square is far better than staying at Ritz (“if it’s good enough for Nelson, it’s good enough for me”).

1925’s hit “Craving” is as good a description of thirst for a partner as any current song, and showcases Nugent’s scat skills perfectly. Another new composition “Same Again” is a familiar post breakup lament. 1936’s big band classic “It’s No Fun” is here stripped down to mostly piano, horn and vocals to positive effect.

The album’s midpoint instrumental, Nugent’s version of Willie “The Lion” Smith’s 1928 classic “Echo of Spring,” brings some strings into the piano mix. 1931’s popular “Swinging in a Hammock” dispenses with innuendo and gets right to it! Another original “She Don’t Have Time to Smell the Roses” is a lament about a mismatched love.

Nugent and Evans add lyrics to Joe Venuti’s 1926 “Little Buttercup,” finally giving the song, the love story it always needed. Clarence Williams 20s classic “Nobody but my Baby” gets the piano and horn treatment here. The album’s penultimate track is a faithful, perfect rendition of Irving Berlin’s “End of the Road.” The closer is a rousing version of the innuendo filled “Caretaker’s Daughter” from the 1925 silent film of the same name.