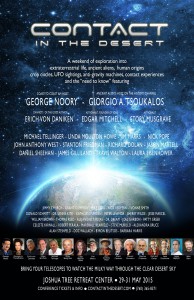 Heading into its third year, CONTACT in the DESERT has quickly become the top UFO Conference in the US. Converging on the Joshua Tree Retreat Center from May 29-31, this noted contact point will host the top global UFO experts including two celebrated American astronauts – Edgar Mitchell and Story Musgrave. The astronauts will be joined by headliners Chariots of the Gods author Erich von Daniken, “Ancient Aliens” most prominent expert Giorgio A. Tsoukalos, and George Noory host of “Coast to Coast Radio AM.”

CONTACT In the DESERT 2015 is committed to a serious, academic look at the UFO phenomenon, its impact on the human race and what it means going forward. CONTACT in the DESERT will explore alien technology, human origins, forbidden archeology, ancient aliens, and the “need to know” with the leading scientific and military experts, researchers and theorists on the subject.

With crop circles and mass sightings, such as the famous Phoenix Lights, more commonplace than ever, UFO awareness has come into the mainstream. The United Kingdom, France, Mexico, Brazil, and several other countries have finally opened their UFO files in recognition of the right to know, resulting in accelerated public interest in these phenomena.

Roughly breaking off into several tracks, the conference will focus on Ancient Alien studies, Contact Experiences, Sightings, Crop Circles, Abduction, other proof of alien visitation, and Government Interactions with Aliens.

Ancient Alien buffs will thrill to hear the godfather of Ancient Astronaut theory, Erich von Daniken. Von Däniken’s books have sold 63 million copies worldwide. From his books, two full-length documentary films have been produced: Chariots of the Gods and Messages of the Gods. Of the more than 3,000 lectures von Däniken has presented in 25 countries, more than 500 have been at universities.

Other experts expected include Nick Pope, Nick Redfern and Michael Tellinger. Nick Pope worked at the British Ministry of Defense for 21 years including investigations of UFO phenomena from 1991-94. Nick Redfern is an expert on how and why government agencies have, for decades, taken a clandestine and profound interest in numerous archeological, historical and religious mysteries.

Tellinger will discuss the vanished civilizations of southern Africa and the origins of humankind. He will graphically expose discoveries that are the catalyst for rewriting our ancient human history and provide the physical evidence for much of researcher and author Zecharia Sitchin’s work. Tellinger’s books, which include Slave Species of The Gods and Adam’s Calendar, have become favorites with readers in more than 30 countries.

The government interactions and cover-up experts at Contact in the Desert include Jim Marrs, Linda Moulton Howe, Nick Pope, Richard Dolan, and Stephen Bassett.  Stephen Bassett produced a citizen hearing on Disclosure in 2013 at the National Press Club in Washington, DC. At that time 42 researchers and military/agency/political witnesses from 10 countries testified for 30 hours, over five days, before six former members of the U.S. Congress regarding events and evidence confirming an extraterrestrial presence engaging the human race.

The Contact Experience track includes abductees and abduction experts, Dr. Lynne Kitei, Nick Redfern, Robert Perala, Travis Walton and Yvonne Smith. Walton, whose personal story was told in the feature film Fire in the Sky, will share his latest insights on his experience and the abduction phenomenon.

In addition to the panels, lectures, and natural beauty included with a weekend pass, attendees are also able to purchase tickets for more than 20 workshops from the top UFO experts, including David Wilcock, Erich von Däniken, Giorgio A. Tsoukalos, and a luncheon with Geogre Noory. James Gilliland will offer fieldwork experiences, and on Monday June 1, von Däniken, Wilcock, Tellinger and others will offer three-hour intensives.

The Joshua Tree Retreat Center, located at 59700 29 Palms Highway, Joshua Tree, CA is the perfect setting for CONTACT in the DESERT. An underappreciated modernist gem, the spectacular center, set on an ancient sacred site, is the oldest and largest retreat center in the Western US and boasts outstanding architecture designed by Frank Lloyd Wright and his son, Lloyd Wright. Lodging options include extensive and beautiful campsites at the retreat center with bathroom facilities and a sparkling pool (however no hook ups).

There are also plenty of nearby hotels in Joshua Tree, Yucca Valley and Twentynine Palms, with special rates available for attendees. On-site rooms and suites are already sold out for the event, however there is dorm space available. The Center offers a variety of meal-plan options right on site.