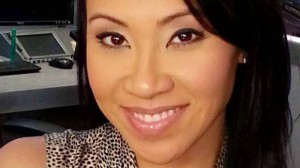 The Eric De La Cruz Hope for Hearts Foundation is pleased to announce their founder, former NBC News and MSNBC anchor, Veronica De La Cruz has made her long awaited debut in the Bay Area anchoring the KPIX 5 News at 6pm as well as launching a new 10pm show on the CW, which debuts in July. Becoming a part of Northern California’s pioneer television station after a long run in national news represents a homecoming for this self-described “California girl”.

As a child, Veronica and her brother Eric De La Cruz, for whom she founded Hope for Hearts, lived in Half Moon Bay. De La Cruz moved back to the Bay Area this spring with her year old son Hartley Eric, who she named in honor of her late brother.

De La Cruz also feels at home with the Bay Area’s technology scene as she is known for being an early Twitter activist for the Hope for Hearts campaign she started while trying to save her brother’s life. Eric needed a heart transplant but was refused due to poor health insurance. She was successful at raising hundreds of thousands of dollars for her brother and, subsequently, significant awareness for health care reform through social media. Her efforts continued with consecutive trips to Washington to share her brother’s tragic story with lawmakers.

“It makes perfect sense to bring Hope for Hearts to the Bay Area, which is home to the most important innovations in technology and medicine. Both are vital to our mission of assisting the financial, educational and emotional needs of heart transplant patients around the United States.” De La Cruz notes.

Before joining KPIX, De La Cruz anchored and reported on MSNBC. She was the host of their early morning show “First Look,” as well as NBC’s “Early Today Show,” and she served as a correspondent for both NBC and MSNBC.

“Veronica is the best kind of broadcast news anchor – a passionate journalist dedicated to reporting the news with insight, accuracy and balance. We’re thrilled to have her on the air at KPIX 5,” said Dan Rosenheim, Vice President and News Director, KPIX 5/KBCW.

Additionally, she started her career in digital media, hosting a music show for the Digital Entertainment Network. There she interviewed artists, produced artist biography pieces, and co-hosted their news show. Veronica also worked with SonicNet/Digital Planet where she interviewed many top artists such as Eagle Eye Cherry and the Roots.

“San Francisco leads the discussion in so many areas I am passionate about…technology, health care, and the Asian Pacific Islander community. I am a California girl, born and raised, so returning to work alongside KPIX’s team of outstanding journalists is the opportunity of a lifetime,” said De La Cruz.