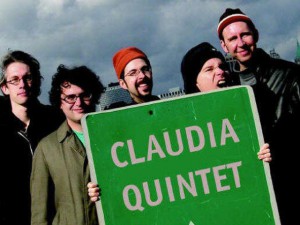 The Angel City Jazz Festival continues on Friday October 11 at with music beginning at 8:30PM in a return to a favorite venue, REDCAT at the Disney Hall, for three exceptional presentations. The evening will begin at 7PM with a symposium on New Technologies in Jazz and Journalism, with music starting at 8:30PM with sets from Jim Black, Tim Lefebvre and Chris Speed, followed by John Hollenbeck’s The Claudia Quintet

The panel co-sponsored by the Jazz Journalists Association will be moderated by longtime Los Angeles music scribe and Metaljazz.com blogger Greg Burk with panelists including Icons Among Us®: jazz in the present tense producer John Comerford, LA Times and Downbeat writer Kirk Silsbee, creative jazz flautist Nicole Mitchell, and others to be announced.

Jim Black is at the forefront of a new generation of musicians bringing jazz into the 21st century. In addition to being one of the most influential drummers of our time, he is also the leader of one of the world’s most forward-thinking bands, AlasNoAxis, featuring his longtime collaborators Chris Speed, Hilmar Jensson and Skúli Sverrisson. Based on the foundation of his virtuosic but highly personal approach to jazz drumming, Black’s aesthetic has expanded to include Balkan rhythms, rock songcraft and laptop soundscapes. Though he is revered worldwide for his limitless technique and futuristic concepts, what many listeners treasure in most Jim Black’s work is the relentless feeling of joy and invention he brings to his performances. Jim Black’s smiling, kinetic, unpredictable presence has enthralled and inspired audiences worldwide for over twenty years.

Rocketing between New York and Los Angeles, Tim Lefebvre is quickly carving out a bold and progressive vision of what a contemporary bassist can and should be. Fashioning a leadership role in avant-garde jazz and funk circles, Tim is also a capable and reliable sideman routinely called upon by today’s leading innovators from across the musical spectrum including: Elvis Costello, Chris Botti, John Mayer, Sting, and Donald Fagen. A native of Foxboro, Massachusetts, Tim majored in both political science and economics before earning his gigging stripes, on of all places, a cruise ship. Once back in port, Tim dove headlong into New York’s burgeoning underground live electronica and jazz scenes, exposing himself to some of the city’s most progressive players including drummer Zach Danziger and the legendary guitarist and former Steely Dan sessions player Wayne Krantz.

Chris Speed is a composer, clarinetist and saxophonist living in Brooklyn, NY. His bands include Human Feel, yeah NO, Trio Iffy, Pachora and The Clarinets. He is a member of Jim Black’s Alas No Axis and John Hollenbeck’s Claudia Quintet. Speed was born in Seattle in 1967 and graduated from the New England Conservatory in 1990. In 1992 he moved to NYC where he joined Tim Berne’s Bloodcount. Throughout the nineties Speed worked with many pioneering bands in the creative new music/downtown scene including the Dave Douglas Sextet, Myra Melford’s Same River Twice, Erik Freidlander’s Chimera, John Zorn’s Bar Kokhba and Mark Dresser’s trio with Anthony Coleman. During this time he also began pursuing his interest in East European folk music, forming Pachora in 1992, and traveling throughout Bulgaria, Greece, Turkey, Syria, and Macedonia. Speed is considered one of the leading NYC musicians linking jazz and creative improvisation with Eastern European and Middle Eastern folk music. Currently, he works with Uri Caine’s Bach, Mahler, and Mozart projects, as well as Ben Perowsky’s quartet. Chris was named the rising star clarinetist in Downbeat magazine for 2004 and 2005. In April 2006, he launched Skirl Records, a label dedicated to Brooklyn based creative music.

The Claudia Quintet has walked a unique path in contemporary jazz since their founding in 1997. Unlike most jazz ensembles where the particular musicians may come and go, drummer, composer and leader John Hollenbeck always wanted Claudia to be a ‘band’ with a sound not only determined by the compositions and the instrumentation, but with the actual players who perform the music. Due to this concept Claudia has had an immediately identifiable sound since its inception. In that sound, the exceptional artistry and individuality of each musician is skillfully revealed throughout Hollenbeck’s original compositions.

This NYC ensemble’s sound continues to explore the edge without alienating the mainstream, proving that genre-defying music can be for everyone. The Claudia Quintet has amazed audiences from Alabama to the Amazon. Their singular sound has inspired dancing hippie girls at a New Mexico noise festival, the avant-garde cognoscenti in the concert halls of Vienna and Sao Paolo, and a generation of young musicians worldwide. In the course of the thousands of miles they have traveled together and hundreds of concerts they’ve played, the Claudia Quintet has evolved and grown, developing a dynamic live sound based on trust and spontaneity. They bring this powerful energy into the studio, where they record the old-fashioned way, live, playing as a band.

Over the past decade, the group has released six CDs that are critically acclaimed worldwide and whose appeal extends well beyond, as well as including traditional jazz audiences. The group’s first album, The Claudia Quintet, was released on the Blueshift CRI record label. The group has since established a long time relationship with the Cuneiform label, releasing five albums with them.