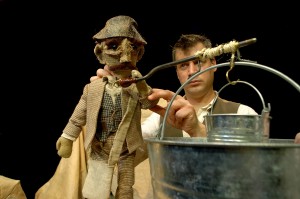 Puppet State Theatre Company, based in Edinburgh, was founded by Richard Medrington. After performing his one-man puppet shows for 20 years he joined forces with puppeteer Rick Conte and puppeteer/maker Ailie Cohen in 2006. Their show The Man Who Planted Trees has toured to schools, village halls, theatres and festivals across the UK and Ireland as well as in Malaysia, Bermuda, the Netherlands, USA, Canada and Australia including performances off Broadway at the New Victory Theatre, and at the Sydney Opera House.