The August 3 First Fridays Jazz Series installment kicks off at 9pm with roots jazz collective The Dustbowl Revival, a Venice based outfit that merges old school bluegrass, swamp-gospel, jug-band, jump blues and the hot swing of the 1930’s to form a spicy roots cocktail. Known for their raucous dance-inducing live sets, the Dustbowl Revival plays what some call hillbilly jazz—the original front porch rock n’ roll. Think Dylan and The Band in Newport meets Louis Armstrong in New Orleans meets Edward Sharpe and The Magnetic Zeroes on the beaches of LA. 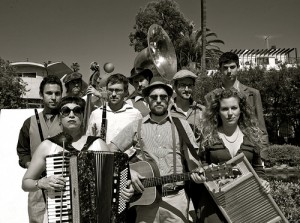 It’s young people playing high-energy, vintage music and it’s all written and composed by howlin’ and stompin’  frontman Z. Lupetin who first envisioned putting together a kind of roots super-group when he moved from Chicago, where his father is a blues harp virtuoso who sometimes sits in, to Michigan and then to sunny Los Angeles three years ago.

Growing from a small string band diligently playing local Southern California clubs, including over a hundred shows in the last two years, The Dustbowl Revival is now a collective of over ten musicians with instrumentation that often includes tuba, trombone, clarinet, cornet, trumpet, mandolin, banjo, drums, guitars, double bass, harmonica and plenty of washboard and kazoo for good luck. The band’s spontaneous, participatory set-lists assure that every show is a little bit different.

With an enthusiastic and growing following, The Dustbowl Revival released You Can’t Go Back To The Garden of Eden in 2010 to rave reviews. Merging their vintage style with a hip, lose-your-troubles-and-start-moving vibe that rings especially true for these times, the record perfectly represents the band’s upbeat message.

Joe’s Restaurant is located at 1023 Abbot Kinney Blvd in Venice, CA 90291. Reservations are made by calling 310-399-5811 and are strongly recommended as patio seating is limited. The music begins at 9pm on the patio with seating being cleared at 10pm for dancing. There is no cover charge for the music, but dinner orders are required for table seating. Guests are asked to mention to the host that they are there specifically for the music when they reserve or arrive. There is valet parking, a paid parking lot, and street parking.