A fresh idea in collaborative fundraising will take place on Saturday, August 4, 2012 at a private home in Los Feliz from early afternoon until late night.  Synergy = Music + Sustainability is an innovative, multicultural, experiential event to help raise funds for two dynamic, solution-based nonprofits based in LA: Arts:Earth Partnership (AEP) and NextAid.  Music and arts producer, Jonathan Rudnick (theLIFT/Noise Pop Culture Club/Giant Step co-founder) is at the helm bringing the best talent Los Angeles has to offer to this consciousness-raising event. The fundraiser will run from 4:00 to 11:00pm and is taking place at Synergy House, a beautiful Mediterranean/Spanish historical eco-home with detached studio space and a lagoon pool just east of Hollywood off of Franklin Ave.  The exact location will be revealed upon ticket purchase.  Tickets range from $25 to $50 and are available at www.synergy-la.eventbrite.com.

A feast for the senses, attendees will experience an eclectic mix of live music, exciting DJs, performance art, delicious African foods, a lagoon pool and fun activities for the kids, creating a stimulating atmosphere to feed the soul. The purpose of the event is two-fold: to create an inspiring atmosphere where altruistic people can come together and find their synergies: values and ideas they have in common, to feel connected, powerful and positive in the face of today’s environmental and humanitarian challenges, and at the same time, benefit two organizations pooling resources and sharing proceeds. Synergy = Music + Sustainability intends to set an example for a new kind of fundraising event. 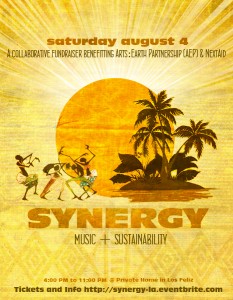 String Theory is a collaborative ensemble of musicians and dancers that utilize invented instruments and sonic sculpture to create their unique performance landscape and sonic footprint. They are well known for their large-scale performance installations that transform environments and architecture into giant musical instruments up to 800 feet long. The ensemble was founded by instrument designer/builder and composer, Luke Rothschild, choreographer/director, Holly Rothschild, and cellist, composer, Joseph Harvey. www.stringtheoryproductions.com

GlobeSonic was founded in NYC in the summer of 1999 by music impresario Fabian Alsultany. Focusing on representing the modernization of world music, GlobeSonic Sound System is a DJ collective spinning a high-energy ecstatic dance celebration of the earth’s musical heritage, weaving traditional music with modern aesthetics. “The music is a reflection of the commonalities between cultures, and the vast richness of our planetary heritage”, says founder Fabian Alsultany. “Our work is not only to get the dance floor moving, but to also stimulate a deep sense of planetary unity through music and dance.”

Derek Beres has devoted his life to exposing people to international music, yoga and mythology as a means of creating better individuals and a more understanding global culture. A multi-faceted journalist, DJ and yoga instructor, he is also the Creative Director of the Tadasana International Festival of Yoga & Music. http://www.globesonic.com.

Originally from Nigeria, Nnamdi Moweta came to the US over twenty years ago. After studying at the San Francisco Art Institute, he quickly established himself as an influential DJ, music supervisor, consultant, manager, and promoter. Nnamdi has interviewed renowned international artists past and present such as Fela Kuti, Baaba Maal, and Youssou N’Dour. Always on the forefront of the African music scene, Nnamdi continues to promote and support local endeavors that strive to educate the public about African culture and music. He is the host of Radio Afrodicia on KPFK, one of the longest running African music radio programs in the country.  http://www.afrodicia.com/about-nnamdi.html

Raised in Detroit with a father who was on the Motown Label, Eddie Guzman of Rare Earth, Marissa Guzman is definitely paving her way as a producer. Already well known in the house music scene as an up and coming vocalist, Guzman is now recognized as a producer for her album “Joy Road” released last year. Ninety percent of the album is made up of her own compositions, with the songs ranging from Downtempo to Electro Pop, to Ragtime to House, and beyond. The first single, “Time to Go” remixed by Black Coffee, went straight to #1 on Traxsource and was nominated in the South African Music Awards for Best Remix of the Year. The Joy Road Remix Album has just been released and is available now with funky, deep and juicy remixes by Kerri Chandler, Mr. V, Liquideep, and many other top producers. http://juicylucyrecords.com

Amadou Fall is a native to Senegal, West Africa and comes from a family of musicians; His father was a guitarist who played with several well-known Senegalese musicians including Baba Maal. Amadou brought the Kora to his family at the age of 10. The Kora which is a 21 stringed instrument of fishing line, wood, calabash (gourd) and cow skin and can best be described as the African Harp. Amadou has been playing for 20 years and has performed with various artists such as Fatou Lowbe, Ibrahim Ba, Djembe Rhythm, Irene Tassambendo and many more.

Los Angeles DJ/Producer Jose Marquez’s musical influence is a result of being brought up on a stable diet of Latin and world music. Always intrigued by electronic dance music, Jose’s mission has been to fuse his love of world music with the dance floor. He has indeed succeeded in his quest by creating club bangers such as the remix of Celia Cruz’ ‘Elegua’, Nina Simone’s ‘Black Bird’, and has put out releases on respected labels such as Tribe, Vega & Yoruba Records. Jose’s sound can best be described as a fusion of Deep Afro-Latin Soul and percussive dance floor rhythms.  www.serenityinsound.blogspot.com

Both NextAid and AEP work with the arts community to mitigate some of the planet’s most pressing environmental and societal problems with tangible projects.  Funds raised will be used to further implement AEP’S environmental sustainable certification program in Los Angeles targeting cultural facilities.  NextAid will use the funds to finish construction of a sustainable youth workshop in Nairobi, Kenya.

Arts:Earth Partnership (AEP) has been in existence since 2008 and has created a user-friendly green certification program specifically for the arts sector and cultural institutions. Endorsed by the cities of Los Angeles and Santa Monica, both have adopted AEP’s standards into their “official” Green Business Certification Process.  Funds raised at the event will help AEP certify more facilitates in the greater Los Angeles area and lower the negative environmental impact of the cultural sector.  The money will also be used to implement the Los Angles Arts Environmental Impact Report (LAAEIR), a project that gathers data about the environmental impacts of arts organizations in the greater Los Angeles area. www.artsearthpartnership.org

NextAid is a 10-year old Los Angeles based nonprofit organization that harnesses the power of music, specifically electronic dance music, to support sustainable development projects that serve children, youth and women in Africa. Currently, funds raised are going toward the completion of the Kawangware Vision Centre (KVC) in Nairobi, Kenya.  KVC is a youth-driven, locally created and managed organization that runs an ecological business making silkscreened gift bags out of recycled paper for the tourism industry. www.nextaid.org